It's only 2 miles to Canada along I-89 north of Burlington, Vermont. (Photo by Larry Luxner)

Canada, she notes, has the third-highest costs for medicines in the developed world after the United States and Switzerland. Unlike hospital and physician care, coverage for therapies is not universal; about 2 percent of Canada’s 36 million people have no coverage, and 10 percent have inadequate coverage. 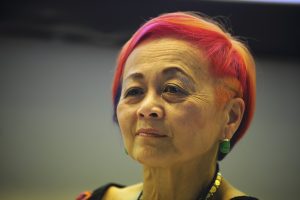 In addition, Canada lacks a legal framework that specifically encourages the development of orphan therapies — unlike the United States, which adopted the Orphan Drug Act in 1983. Other jurisdictions with similar laws include Japan (which passed its own act in 1993); Australia (1997); the European Union (1999); Taiwan (2000), and South Korea (2003).

“In Canada, we have still yet to pass actual orphan drug legislation,” said Wong, interviewed at the recent 9th European Conference on Rare Diseases & Orphan Products in Vienna. “We’ve come close, but never quite gotten it through our parliament. It’s purely politics.”

Wong said the framework for such a law has been awaiting approval for more than four years — but that it’s being held up at the provincial level.

“The provinces are concerned that introducing orphan drug legislation will increase the number of orphan drugs coming to Canada and the budget, which is stupid,” she told BioNews Services, which publishes this website. “They believe that if we make legislation easier, there will be more drugs and more people will want them, and it’ll cost us more.

“We’ve been fighting this mentality all along.”

ALS, SMA and obstacles to treatment

According to Wong, 1 in 12 Canadians has a rare disease, and two-thirds of those who do are children.

“Rare diseases actually affect more Canadians than all cancers combined, and more than diabetes or cardiovascular disease. It’s a major public health issue, but it is undertreated,” she said. Multilingual sign welcomes visitors to the province of Québec.

Disorders that are particularly prevalent in Canada include multiple sclerosis — particularly in the maritime provinces and British Columbia — as well as ALS, cystic fibrosis and spinal muscular atrophy (SMA). Canada also has a high prevalence of Fabry disease, as well as a large pocket of Charcot-Marie-Tooth disease in French-speaking Québec.

“Right now, we have a big problem with SMA,” said Wong, who’s headed CORD and its three full-time staffers since 2006.

“Health Canada approved Spinraza (nusinersen) for all types of SMA, as did Europe and the U.S. To the best of our knowledge, Spinraza is being funded in 35 countries,” she said, referring to the first disease-modifying therapy for SMA, developed by Biogen. (Price, however is an issue; out-of-pocket treatment in the U.S. costs $750,000 for the first year, and $375,000 per year after that.)

“In Canada, it’s approved only for one-fourth of patients with type 1 SMA,” she said. “You have to be under 7 months old to get access to the therapy, so most of our patients are not getting access. We have close to 47,000 signatures on a petition saying we should fund SMA for everyone, but the government is unwilling to make it available.”

“The company initially chose not to come to Canada because we didn’t have a specific regulatory framework, but they are now considering it,” she said. “In the meantime, a lot of ALS patients were bringing it themselves from Japan or the U.S., and paying for it themselves. The problem is that in some provinces, the clinics won’t infuse it, so patients have to pay for the infusions too. It all depends on where you live.”

Public coverage of prescription medications varies from 27 percent of total drug costs in Prince Edward Island, the smallest of Canada’s 10 provinces, to 55 percent in Saskatchewan, she said.

In 2017, Canadians spent $34 billion on prescription drugs, CORD reports. Taxpayers funded $14.5 billion of that total, and private insurers another $12.1 billion; the remaining $7.4 billion was out-of-pocket. Public coverage varies from one province to another.

“Saskatchewan is our most supportive province in terms of public healthcare,” Wong said. “Even though there’s an agreement to have a national program for newborn screening, we still have huge disparities. In Prince Edward Island, they only screen for six conditions. In Saskatchewan and Ontario, they screen for more than 30 conditions.”

CORD released its Rare Disease Strategy in May 2015 to try to address these issues. This strategy outlines five key goals regarding national rare disease policy:

In addition, only 40 percent felt they got enough information at diagnosis, and half understood the information they received from a healthcare professional. Fewer than 40 percent had access to necessary drug treatments, and personal costs for Canadians living outside Québec were 60 percent higher than for residents of that province, which is Canada’s second-largest in population after Ontario.

“Our biggest challenge today isn’t getting drugs developed or approved, but getting rare disease patients access to them,” Wong said. “This for us remains a huge concern.