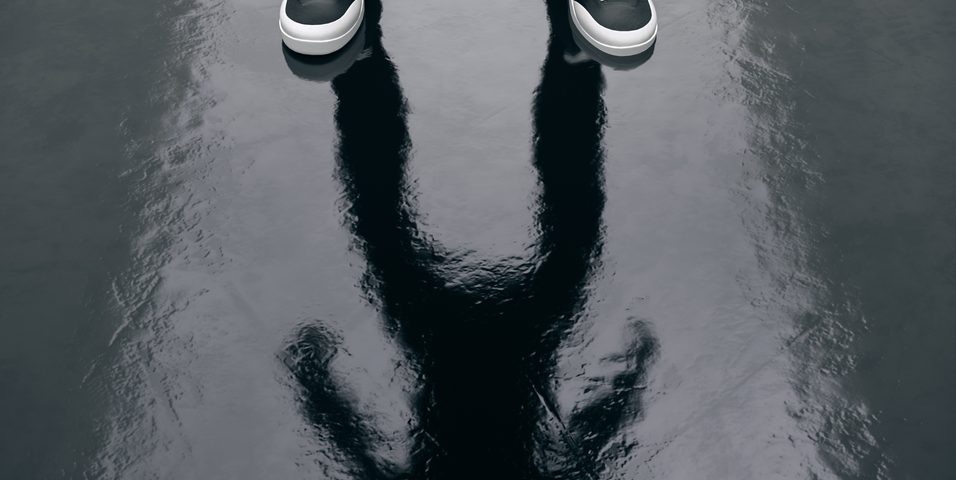 I breathed 23 years of invisible illness before retching tan-green Silly Putty into city trash bins while leashed to a bulky, wheeled, metallic canister of oxygen. Twenty-three years of rotting beneath my skin before the disease turned inside-out.

All eyes were on me as I puked, a freak show exhibit. “Step right up, ladies and gents, to witness The Atrocious Mucious!” My face burned and tears welled in my eyes. (CFers know: This caused a waterfall of snot to gush from my nose.) I wished I had enough lung function to bark at the gawkers to mind their own business. I wished my disease was invisible again.

Life was a race. I needed to live faster than my peers. To make a legacy before departing. I’d push too hard, burn the treads from my tires, lose traction, fall behind my peers. I snuck into hospitalizations (docs called them “tune-ups”) under deceit’s cover. I couldn’t reveal to friends that I was that sick. I even strung along a fib in elementary school about me disappearing for two weeks because the latest Harry Potter film cast me. When the film was released with no Brad on the silver screen, I whined in dramatic dismay about being cut from the final product. Like Harry, I was most comfortable with being invisible, at least, when it came to my disease.

My deteriorative disease became a “one step forward, two steps back” deal each time I bombarded my superbugs with antibiotics. The peers I once raced neck-to-neck were now miles ahead. People held the same towering standards that I’d foolishly built for myself. I loathed people pushing me so hard despite my disease. Which was irrational, considering most friends hadn’t a clue I was ill. I suffered, bitter that I was forced to compete on even ground for the same opportunities as peers while burdened by 24/7 nausea, body aches, malnourishment, and clustered infections, plus frequent hospitalizations.

One day, at 17, I tried sitting during a three-hour bus ride through rush hour, but was told I needed to stand so a person in his 30s could take my seat: “Respect!” Shyness prevented me from explaining that a ferocious pulmonary exacerbation was ravaging my lungs. I stood, blackness swallowing the edges of my vision while waves of sweat poured from my body, splashing into a puddle on the ground. Once off the bus, I collapsed on the grass next to the stop and took a deep, long nap. I began wishing my illness was visible.

Careful what ya wish for

My disease did become known. Friends connected dots: my barking cough (“You’ve had that cold ever since I met you …”) and the occasional enzyme capsule that’d slip out of my pocket. But they couldn’t comprehend the toll my disease demanded of me, how much I suffered at home or in the hospital. (“How was your hospital ‘vacation’? Wish I got one.”) My disease was an annoying cough, nothing more. One friend lashed out at me in the library for “annoying the hell” out of him with my heavy breathing — I held my breath near him from then on. Knowing of a disease’s existence and understanding it are different concepts.

But I think friends understood once my family posted on Facebook that I was dying from a horrific blood infection and that a lung transplant was my only gamble. Or when I returned to public with oxygen tanks, puking into trash bins. Suddenly, everyone treated me differently. Like I was fragile or bound to die at any moment. (People later confessed they’d deleted me from social media because they didn’t want to view the narrative of their friend dying. I understood, though that knowledge crushed me.)

I became a hermit, humiliated by my weakness and cringing at the pity of friends I once competed with. The pity made my disease too real. The realization of how awful I looked hit me hardest when a phlebotomist walked into the vial-packed cubicle, stopped in her tracks, gave me the once-over, and asked my mother, “What happened here?” She saw a broken man on oxygen, with sunken eyes and ragged breathing. A very visible illness.

For the several months before my transplant, I seldom heard from once-close friends. Not a single person looked me in the eye — pupils instead traced the oxygen cannula running beneath my runny nostrils. People feared joking with me because they didn’t want to be “insensitive.” I felt shame, unclean because of my revolting disease.

Illness is dreadful, whether it’s visible or not. But the grass is always greener on the other side, no?

I believe everyone can learn something about CF from this beautiful writing.