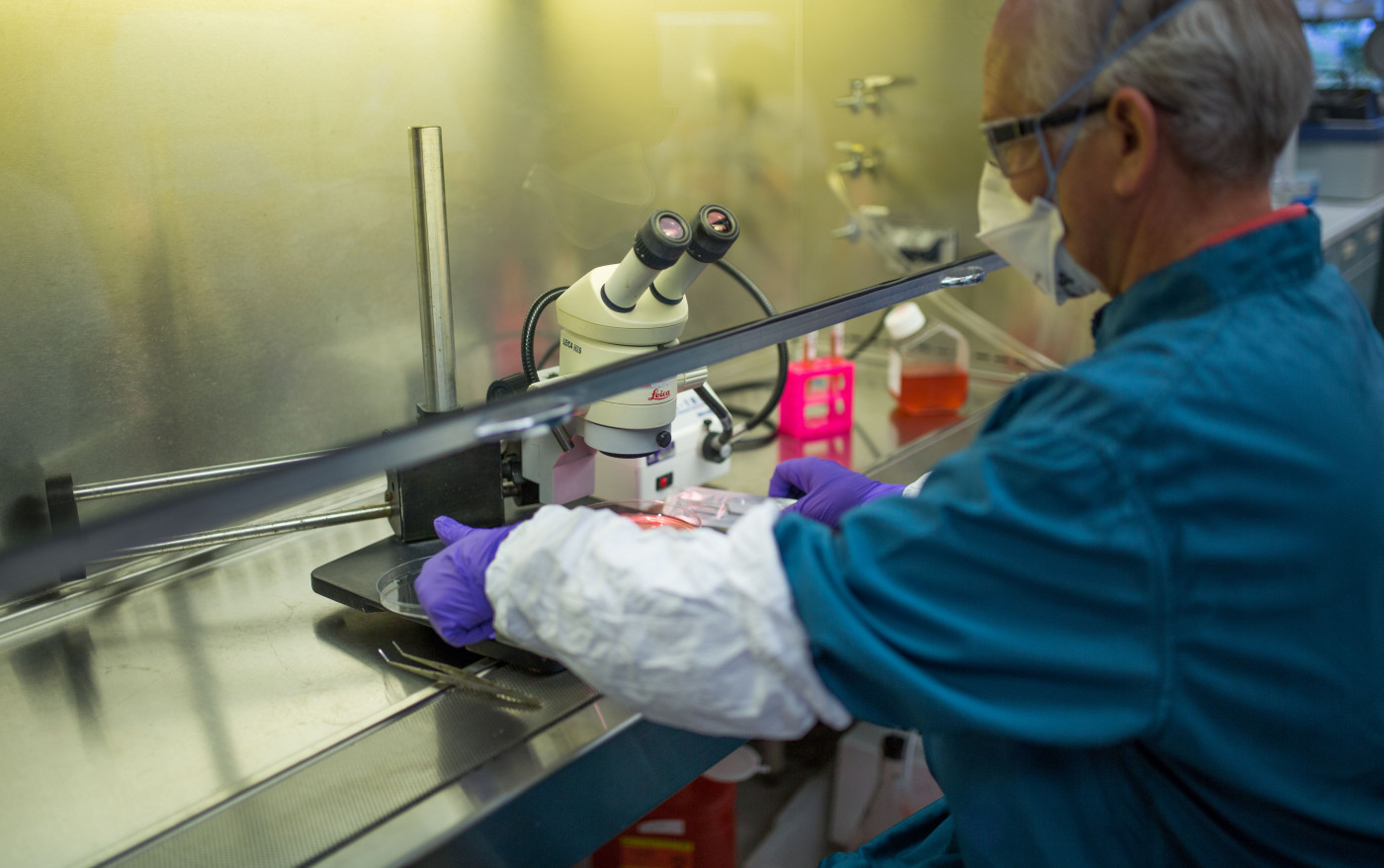 Editor’s note: This is third in a four-part series looking at Vertex Pharmaceuticals and its “all in for CF” approach. Here, we look at potential “next-generation” treatments that range from triple combinations in or readying for clinical trials, to gene editing that has a way to go.

The research that led to Vertex being popularly known as “the CF company” spans almost 30 years and three approved disease-modifying treatments. Now, focus is on younger patients and a “new generation” of potential therapies.

It’s part of Vertex’s three-part approach to treating all with CF by:

Aiming to treat the ‘littlest’

Kalydeco was first approved for patients 6 and older, and Orkambi and Symdeko for those 12 and older. Now, all three are moving into younger age groups.

Within five years of its 2012 approval, Kalydeco’s indication was extended to toddlers with gating mutations starting at age 2 and — last month — to 1-year-olds.

“[C]ystic fibrosis is a genetic disease,” said Kewalramani, who spent 12 years at Amgen before joining Vertex last year. “Our hypothesis was if we can get to patients earlier, we can prevent the decrement earlier, and thereby preserve quality and quantity of life.”

An ongoing Phase 3 trial, ARRIVAL (NCT02725567), has shown that Kalydeco is safe for toddlers between 1 and 2 years old, improves their sweat chloride levels (a measure of CFTR activity), and eases CF-associated exocrine pancreatic insufficiency.

“What we’ve seen in the younger patients is really keen evidence that things like pancreatic function are mitigated … when you start Kalydeco earlier in life,” Kewalramani said. Requests are before the European Medicines Agency (EMA) for similar EU-wide approval in eligible patients starting at 12 months old.

ARRIVAL is continuing to test Kalydeco in younger infants, she added.

Orkambi’s approval for patients with the most common CF mutation (F508del) started with adolescents and adults. The company followed with two Phase 3 trials (NCT02514473 and NCT01897233) in those ages 6-11 — gaining its approval for these children in both the U.S. and the EU.

Most recently, the FDA approved Orkambi for pre-schoolers starting at age 2 based on results of a Phase 3 open-label study (NCT03125395). Another Phase 3 trial in toddlers younger than 24 months may open this year.

But with Symdeko, recently approved in the U.S. for those with two F508del mutations, Vertex may be moving its sights here. Symdeko is less likely than Orkambi to interact with other medications, including its own corrector — ivacaftor.

When a Vertex research team led by Paul Negulescu first started screening molecules that might treat CF, it knew that at least a two-compound combination was essential — a corrector to help the protein fold properly and move to the cell’s surface, and a potentiator to improve its ion-transporting activity once there.

But it hit upon a promising potentiator, ivacaftor, first — a huge boon to the roughly 3% of people with the G551D gating mutation able to be treated with Kalydeco, as ivacaftor was named.

The combinations — Orkambi and Symdeko — came later: ivacaftor plus a corrector. In Orkambi’s case, that’s lumacaftor; in Symdeko’s, it’s tezacaftor.

Neither quite reach the level of benefit for F508del patients that Kalydeco does for those with gating mutations, who don’t need a corrector. Kalydeco’s very success set the bar high.

So, as Orkambi and Symdeko moved toward approval, Negulescu’s team began the “long arc” of a research project — searching for correctors to pair with existing treatments that might bring more of the CFTR protein to the cell membrane. The team hit upon several: triple-combination “next-generation” correctors with names — for now — like VX-659, -445, -152 and -440. As David Altshuler, Vertex’s chief scientific officer, put it, “it’s much more than three times harder to make a triple therapy.” Not only must these compounds do what they need to do, go where they need to go, and not interfere with other workings of the body, they also can’t interact badly with each other.

And it’s a reason the two triple combinations that have moved to Phase 3 trials rely on tezacaftor, instead of lumacaftor.

Some of these new combinations are being tested in patients with two copies of the F508del mutation — those getting partial benefit from Orkambi and Symdeko. Importantly, they’re also being tested in people with “minimal function” mutations — one copy of F508del, and one copy of a given mutation that, as its name implies, leave the CFTR protein barely functioning or unable to work at all.

It’s in these patients, Kewalramani said, that Vertex is starting to see head-turning results.

Early data from two Phase 2 studies, showed that two different triple combinations tested — VX-445 and VX-659, combined with tezacaftor and ivacaftor —  led to impressive improvements in lung function in all patients. But those with minimal function mutations saw gains of 40 and 50 points in sweat chloride, a common measure of treatment effectiveness, and of 9 to 14 points in FEV1, a widely used measure of lung health.

“[These are] really impressive results, in my mind unprecedented,” Kewalramani said. “I don’t know that I expected” numbers that high.

“Since 90% — that’s nine-zero! — of all patients with CF have [at least] one copy of F508 … this has the potential to bring Kalydeco-like efficacy to 90% of people with CF,” Altshuler said of their potential. Vertex is running Phase 3 trials of both combinations.

Under the ECLIPSE program, one study is testing the VX-659 combination in people with two copies of F508del (NCT03460990), and another — still recruiting in the U.S., Europe and

elsewhere — in patients with one F508 deletion mutation and one minimal function mutation (NCT03447249). Both trials include a comparator arm, and have improvements in FEV1 as a primary goal.

Two other enrolling studies (NCT03525548 and NCT03525444) — with similar patient groups and primary endpoints — will test the VX-445 combination as part of the AURORA program.

Recruitment is going faster than the company anticipated, company officials said, and positive results here — those mirroring Phase 2 results —  may lead to a first request for a triple combination approval in 2019.

Edith Zemanick, a pediatric pulmonologist at Children’s Hospital Colorado, which participated in several Vertex trials, is proud her hospital is part of the VX-659 study. “It’s really a shift in how we’re treating CF,” Zemanick said. “We want our patients to have access.”

About 10 percent of all CF mutations don’t allow for any CFTR protein — working or not — to be produced at all.

Compounds can’t correct or potentiate a protein that doesn’t exist, so an entirely new approach is needed — one that might fix the CFTR gene itself.

Vertex may be “the CF company,” but gene editing is not its expertise. So, it teamed with two companies: CRISPR Therapeutics and Moderna Therapeutics.

Scientists discovered in 2014 a way to harness CRISPR/Cas9 — a mechanism used by some bacteria to prevent infection by viruses — to cut unwanted DNA from organisms, raising the possibility of doing so in people.

The field has exploded since, with researchers worldwide testing CRISPR’s limits against genetic and other diseases in a kind of “scientific frenzy,” according to The New York Times.

Vertex sees CRISPR as a possible pair of “molecular scissors,” acting to remove a dysfunctional CTFR gene before it is replaced with a working one – effectively curing the disease.

It entered a four-year agreement with CRISPR Therapeutics — a company started with Emmanuellle Charpentier, one of the scientists who first recognized CRISPR’s medical potential — in 2015. But CRISPR trials in CF patients aren’t likely anytime soon. “[W]e’re up for the challenge. We are working on it,” Altshuler said. “But anyone who’s serious about it realizes that there’s a multi-component aspect.”

As Altshuler explained, “The DNA piece, or the correcting-the-gene piece, is the easy part.”  The hard parts include editing to only affect targeted genes, while aiming at those in both mature lung cells and lung stem cells — which give rise to new cells — because cells in the lung turn over frequently.

Then it would require doing much of the same in the pancreas and other organs CF affects.

CRISPR is still in its infancy, and some scientists and bioethicists have already raised concerns about a limited understanding — and the possibility the tool might be more unpredictable than thought. A study in mice, published in the journal Nature Biotechnology in July, reported damage to genes beyond those targeted.

A separate three-year research partnership was started in 2016 with Moderna Therapeutics, which specializes in a gene therapy approach targeting messenger RNA. Messenger RNA (mRNA) is involved in the transcription of genetic information, the first step in producing a protein.

“We hope it’s sooner, but we’ll work for 10 or 20 years to develop genetic therapies — or any other type of therapy — to treat those people living with CF who cannot take benefit from our small molecule or oral therapies,” Altshuler said.

So, while its triple combinations appear to be zooming ahead, Vertex is with gene therapies about where it was in the early 1990s, screening for the small molecules that eventually became Kalydeco, Orkambi, and Symdeko.

“I want to express … our deep commitment to completing our CF journey. We’ve made a lot of progress. We’re very proud of that,” Kewalramani said. “But we’re not going to rest until we get to all patients … our commitment is really unrelenting.”

Next: Treatment prices run into resistance, and Vertex’s outreach to the CF community.